PALESTINIANS CONVERGE ON JORDAN VALLEY CHECKPOINTS TO PROTEST TRUMP PLAN
The morning after President Donald Trump committed to recognizing Israeli sovereignty over parts of the West Bank during the release of his much-awaited Middle East peace plan, Palestinians protested the deal that would annex the Jordan Valley, the breadbasket of their territory, by motoring trackers through an Israeli checkpoint. Photos by Ahmad Al-Bazz, Haidi Motola, Keren Manor and Oren Ziv, Mondoweiss, January 30, 2020.
See more
Share

SETTLERS SULLY IDYLLIC WADI QANA
Wadi Qana is considered one of the most beautiful natural areas in the occupied West Bank. It is an important nature reserve boasting both fauna and flora. With its numerous springs, the valley has historically served agricultural and recreational purposes for Palestinians who live in the area. By Ahmad Al-Bazz and Anne Paq, The Electronic Intifada, October 1, 2019.
See more
Share 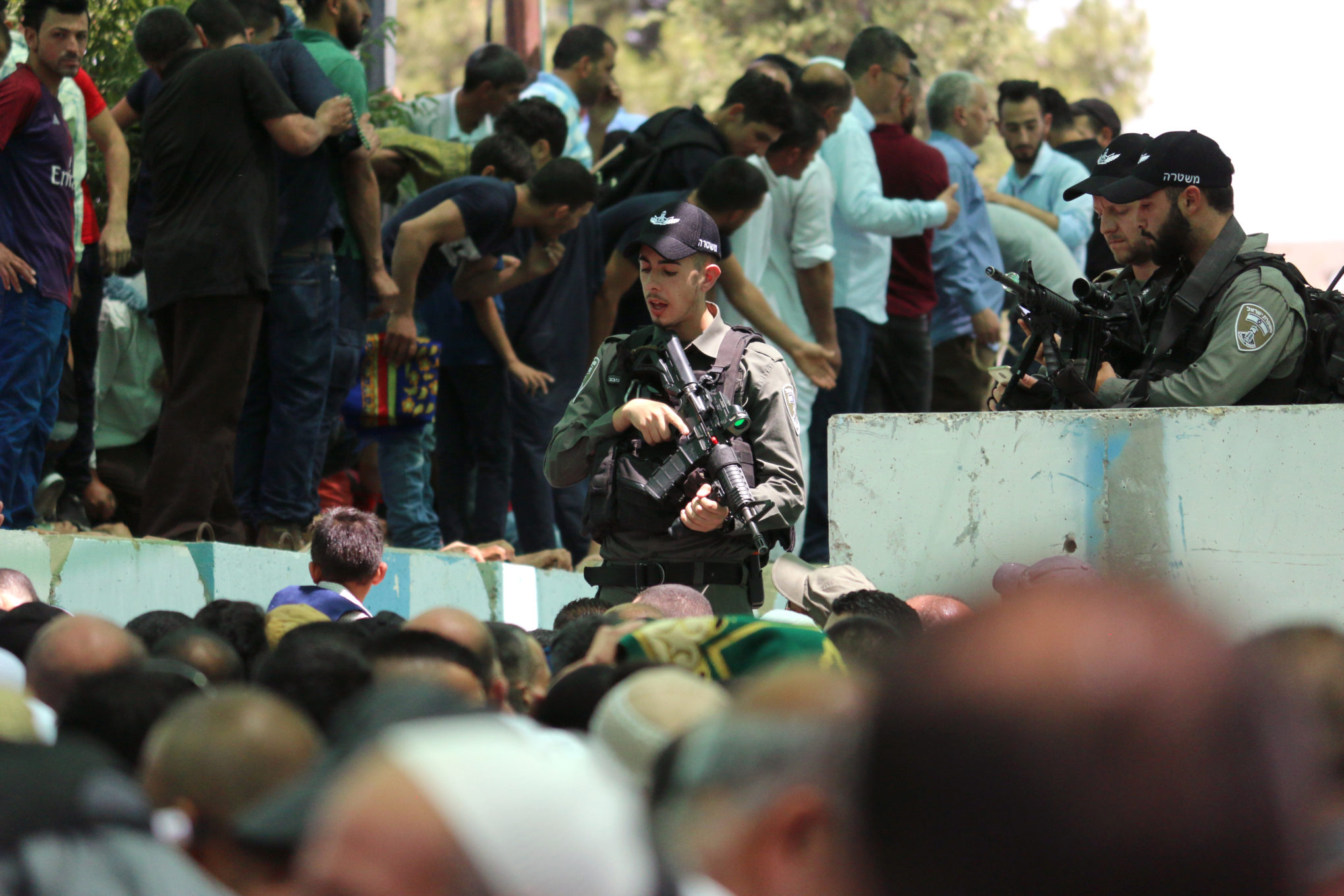 THIS IS WHAT ISRAEL'S ‘RELAXATION OF MOVEMENT RESTRICTIONS’ FOR RAMADAN LOOKS LIKE
Every year during the Muslim fasting month of Ramadan, Israeli authorities approve a package to “relax” the restrictions on movement for West Bank Palestinians. This standard military practice aims, as authorities say, to facilitate Palestinian worshippers’ trips to Jerusalem for the weekly prayer that takes place every Friday. By Ahmad Al-Bazz, Mondoweiss, June 3, 2019.
See more
Share

TENS OF THOUSANDS PROTEST ALONG THE GAZA FENCE
Israeli troops kill three and wound hundreds more in the protests marking a year since the Great March of Return protests began, and coming as cease-fire talks between Israel and Hamas come to a head. By Mohammed Zaanoun, +972 Magazine, March 30, 2019.
See more
Share 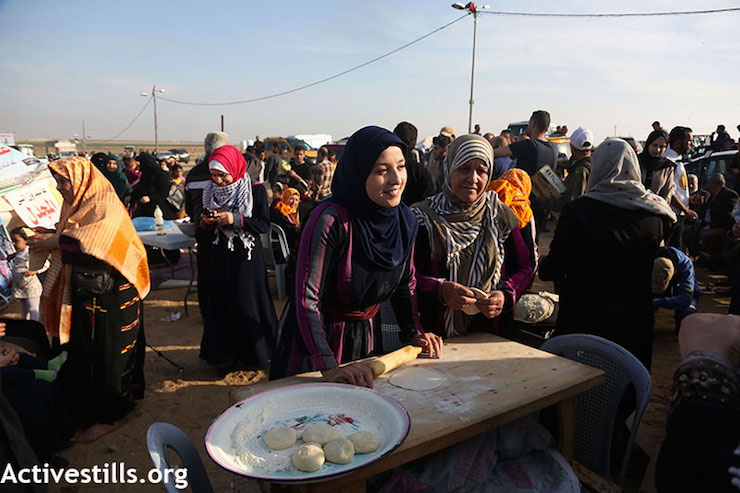 LIFE INSIDE GAZA'S RETURN MARCH PROTEST CAMP
This is what happens at the protest camp when the IDF isn’t shooting — and when the world isn’t looking. Photos by Mohammed Zaanoun, text by Mohammed Zaanoun and +972 Magazine Staff, April 12, 2018.
See more
Share 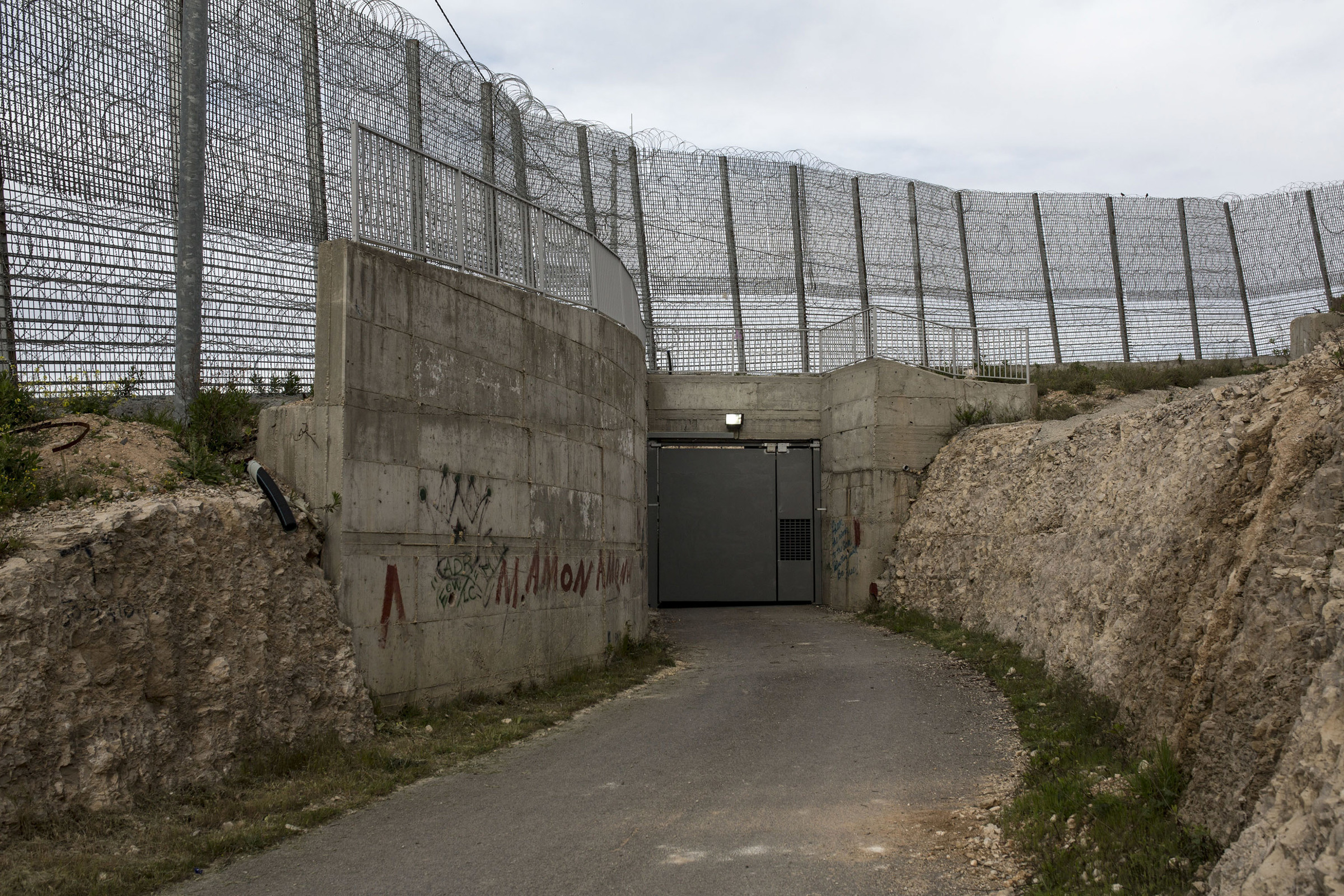 A VILLAGE IN DANGER OF ERASURE
By Anne Paq, The Electronic Intifada, April 23, 2018.
See more
Share

ISRAELI MILITARY CHECKPOINTS ON THE WEST BANK
A photographic essay shot at Israeli military checkpoints in the West Bank on Fridays during Ramadan from 25 May to 10 June 2018. By Anne Paq, New Frame, August 30, 2018.
See more
Share

GREAT MARCH OF RETURN: SIX MONTHS OF PROTESTS IN THE GAZA STRIP
Mohammed Zaanoun, a photographer and videographer, has been documenting the protests since the first day. Aljazeera, September 27, 2018.
See more
Share 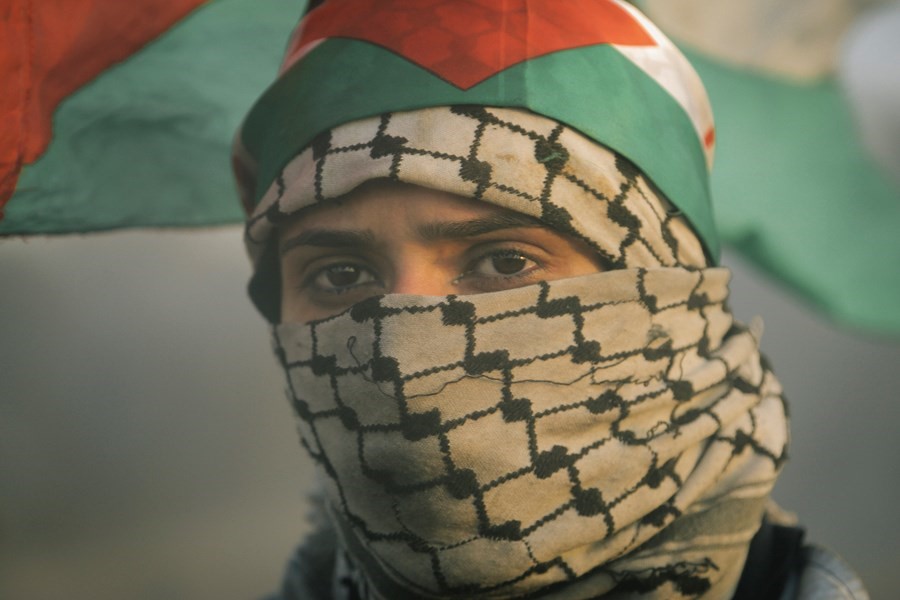 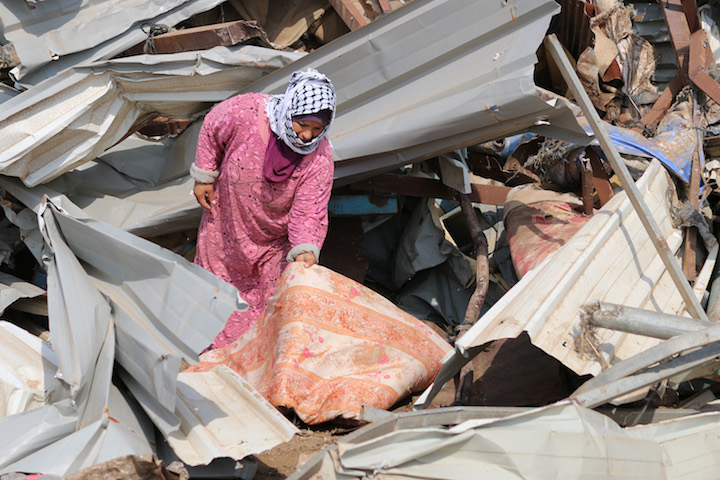 HUNDREDS MARK 13 YEARS OF PROTESTS AGAINST THE WALL IN BILIN
The village that managed to unite the world behind the spirit of nonviolent Palestinian protest marks more than a decade of not only tear gas, night raids and tragedy, but also co-resistance and victories in the struggle against settlements, the separation barrier and the occupation. By Oren Ziv, +972 Magazine, March 2, 2018.
See more
Share 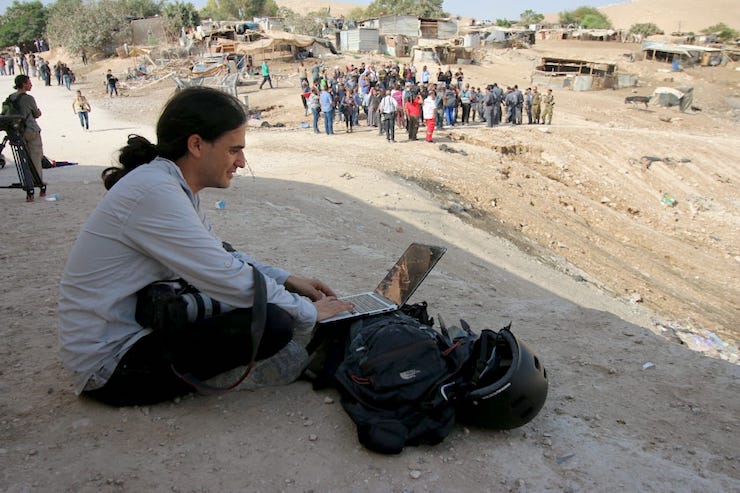 IN JHAN AL-AHMAR, I FOUND RENEWED HOPE FOR RESISTING THE OCCUPATION
Over the last four months I have spent most of my time in Khan al-Ahmar, watching young Palestinians resist, day after day, the Israeli authorities’ attempts to demolish the village. On Saturday night, their struggle finally bore fruit. By Oren Ziv, +972 Magazine, October 21, 2018.
See more
Share 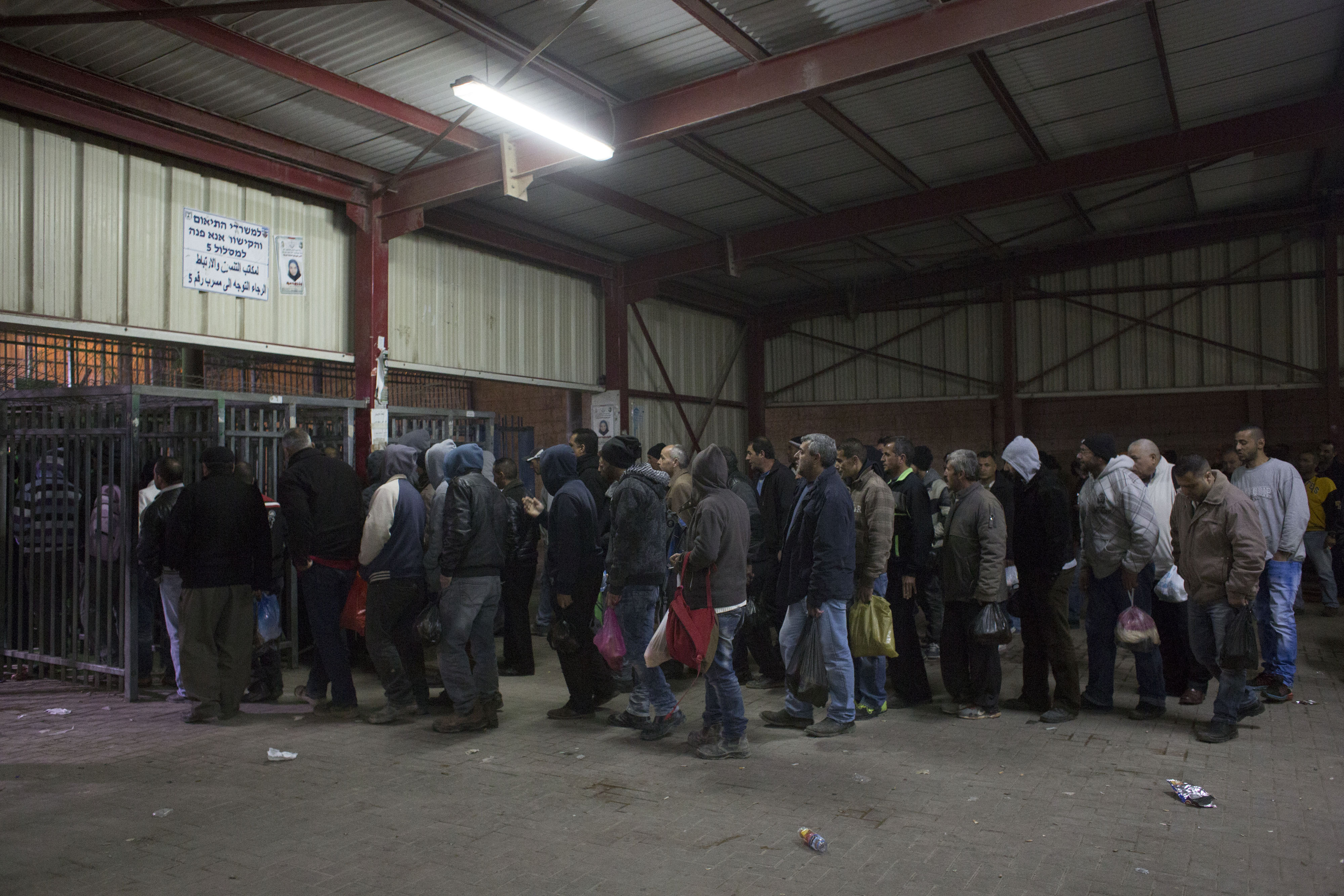 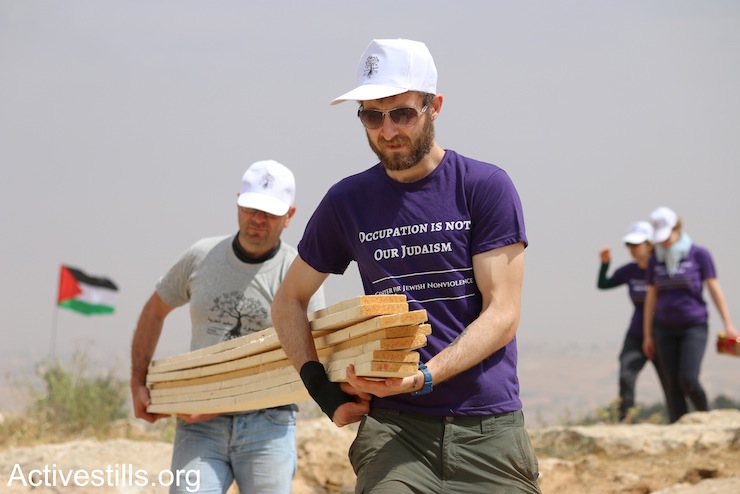 A WEEK OF JOINT STRUGGLE IN SUMUD FREEDOM CAMP
For over a week, Jewish activists from across the globe have joined Palestinians in an effort to rebuild a depopulated village in the West Bank. By Ahmad Al-Bazz, +972 Magazine, May 28, 2017.
See more
Share 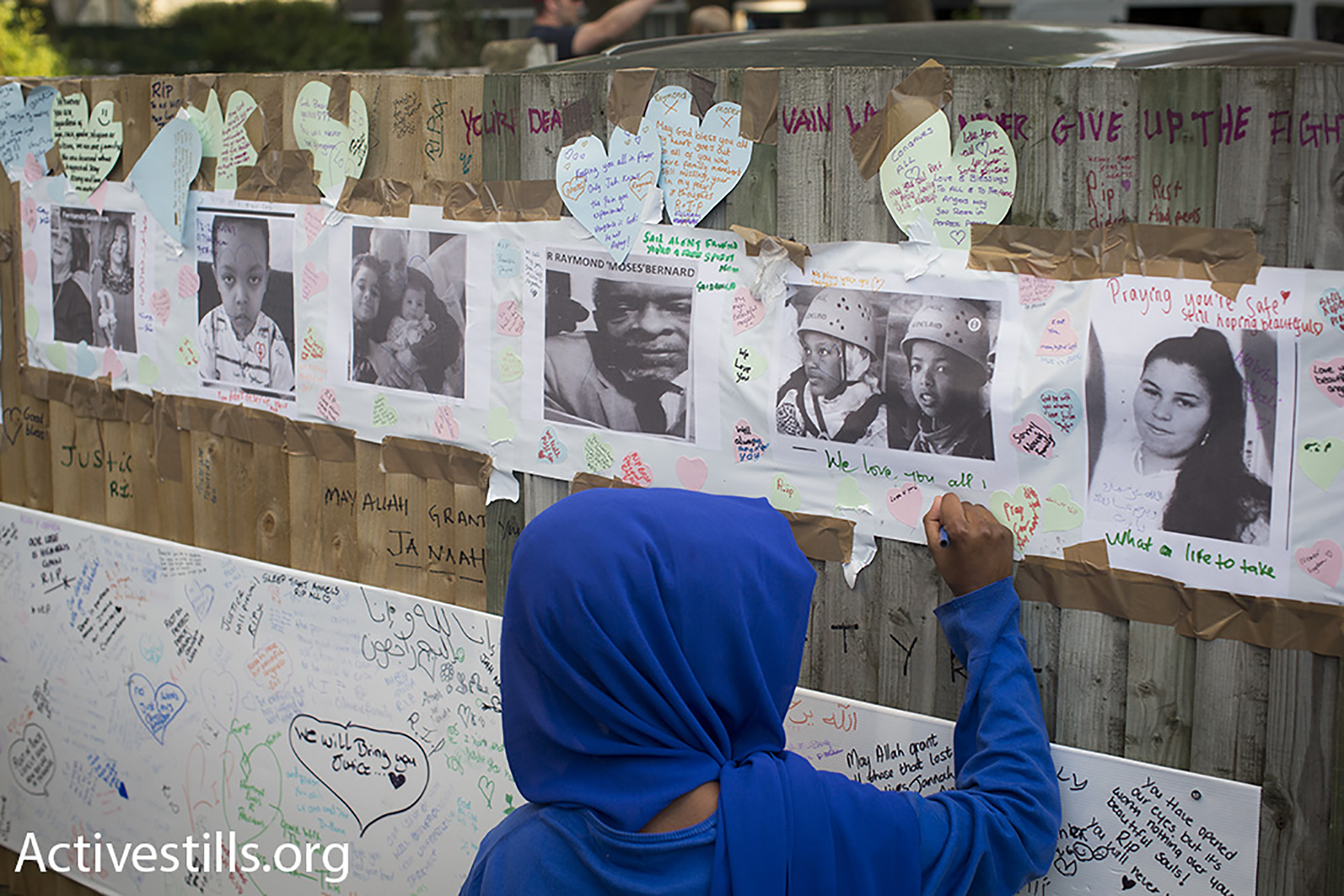 GRENFELL TOWER FIRE
On 14th June 2017, 72 people lost their lives in the Grenfell Tower fire. In the days after, Oren Ziv of the Activestills collective created this photo diary revealing the resilience, anger and grieving in the community and stark injustices. Pluto Press, 2017.
See more
Share 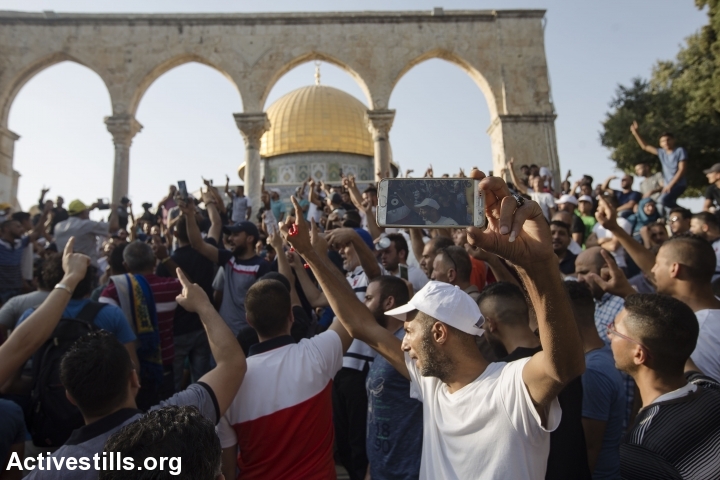 PALESTINIANS RETURN TO AL-AQSA AFTER WEEK OF VIOLENCE
On Thursday, thousands of Muslim worshippers entered the compound for the first time in almost two weeks, where they clashed with Israeli security forces after boycotting the site due to Israeli restrictions. Photos by Faiz Abu Rmeleh, Martin Barzilai, Yotam Ronen, Oren Ziv, +972 Magazine, July 28, 2017.
See more
Share 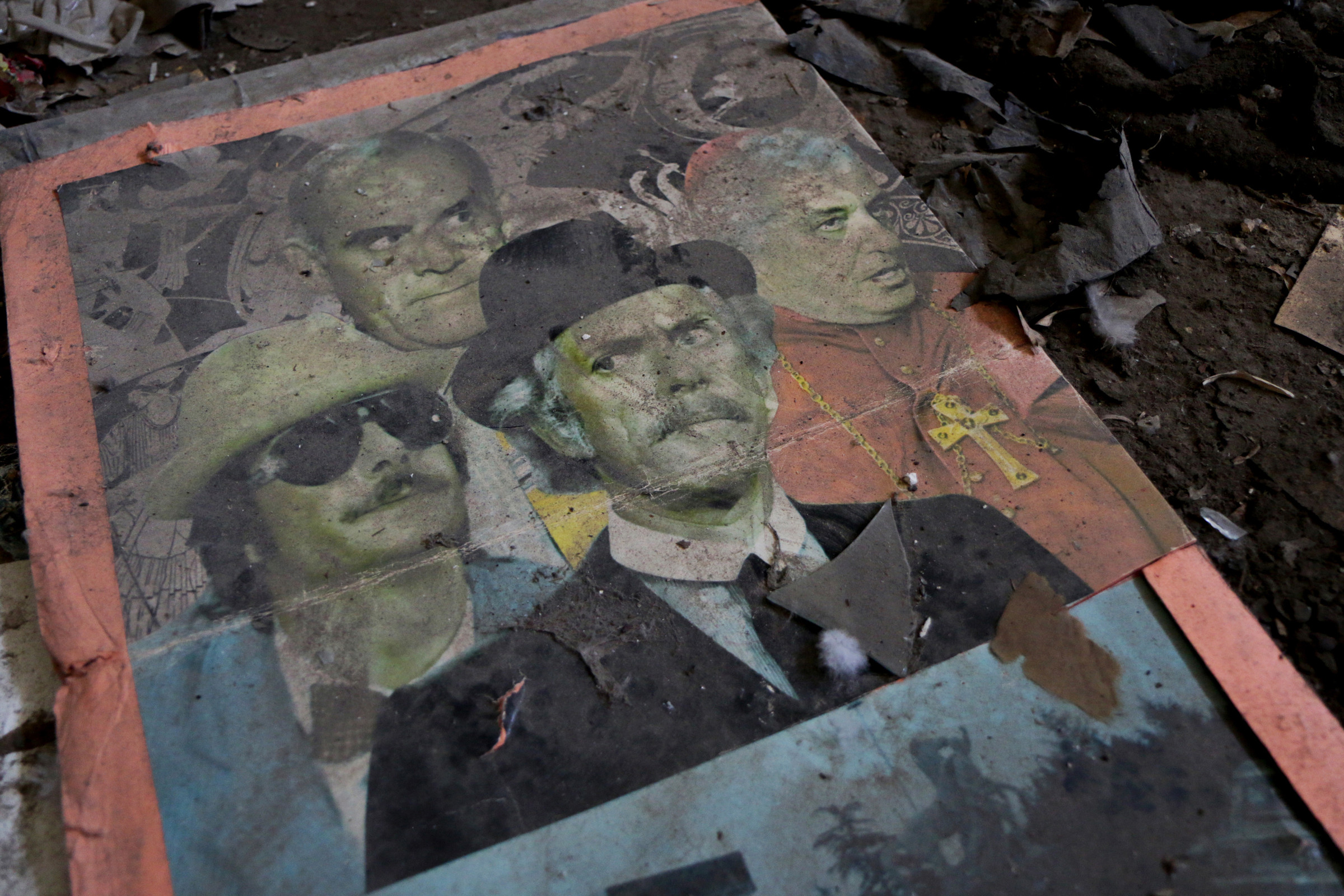 PELESTINE'S DISAPPEARING CINEMAS
One by one, Palestine’s classic cinemas are being erased. A photo essay by Ahmad Al-Bazz, The Electronic Intifada, October 9, 2017.
See more
Share 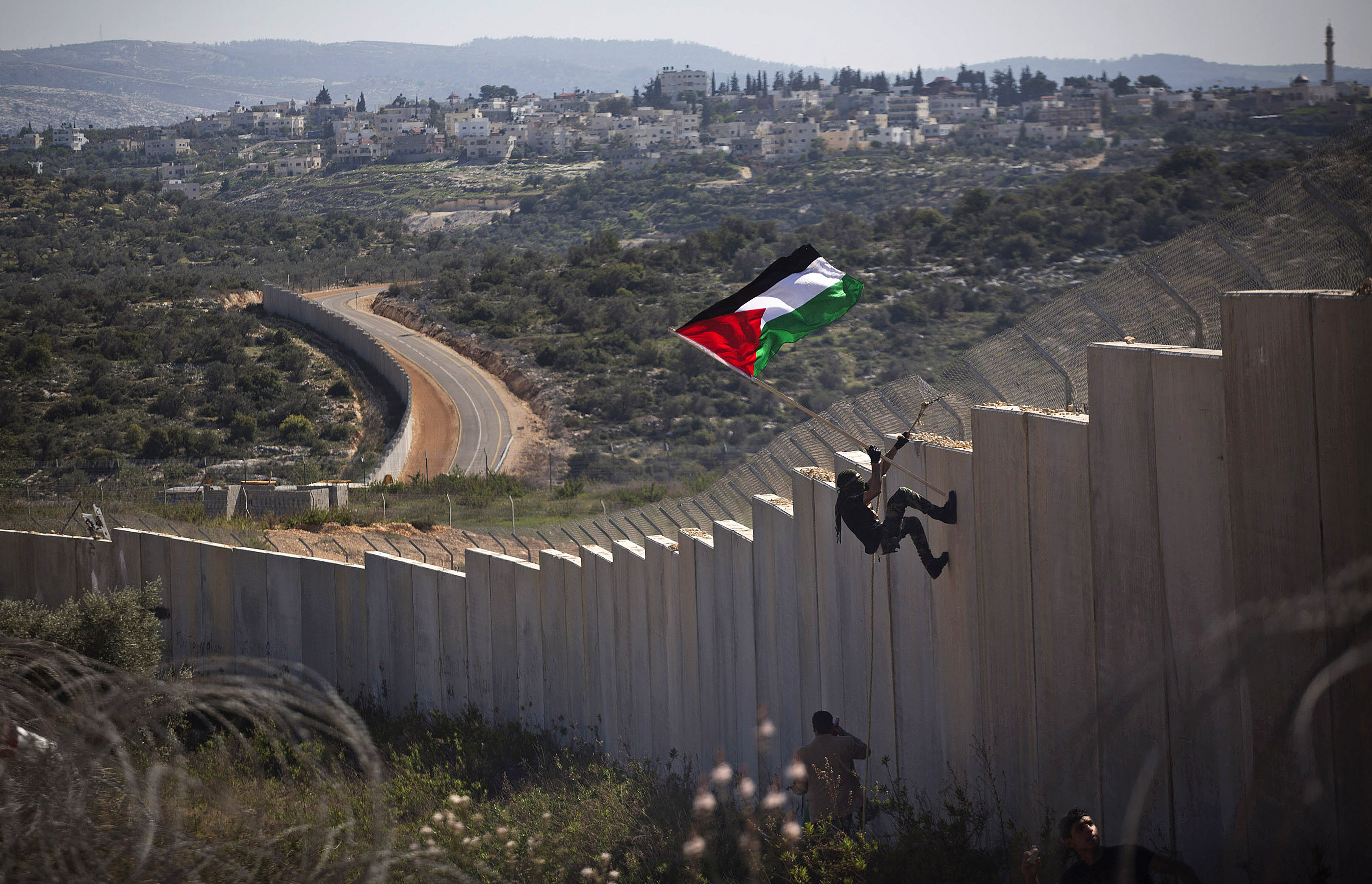 A NEW LIGHT
Documenting both sides of the Separation Wall, an Israel-Palestine divide, photos by Ahmad al-Bazz and Oren Ziv, The Groundtruth Project, May 2017.
See more
Share 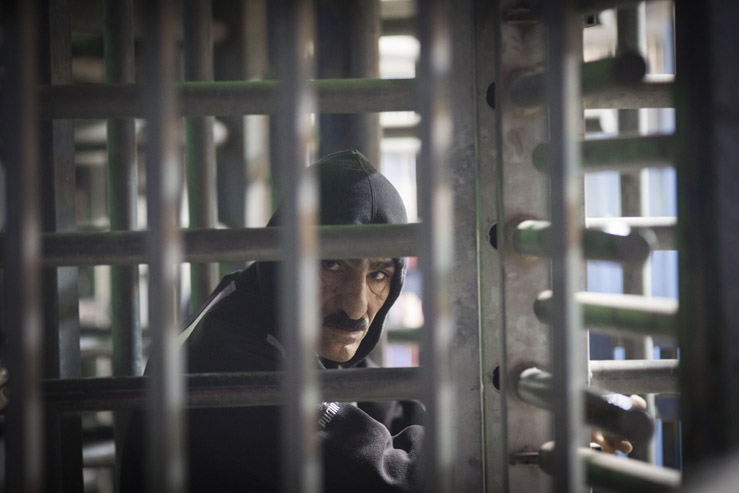 WHAT IT'S LIKE TO ‘COMMUTE’ THROUGH AN ISRAELI ARMY CHECKPOINT
Thousands of Palestinians who have entry permits, along with residents of East Jerusalem cut off by the separation wall, must pass through the Israeli military’s Qalandiya checkpoint every morning and evening in order to go to work, school, do shopping, receive medical care and visit family members. The following is a small snapshot of what that means for the individuals forced to endure its humiliation on just one morning. Photos by Oren Ziv, +972 Magazine, February 27, 2016.
See more
Share 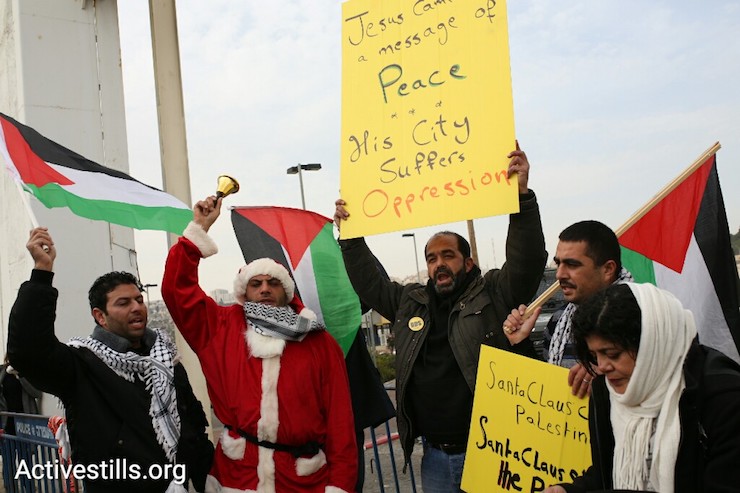 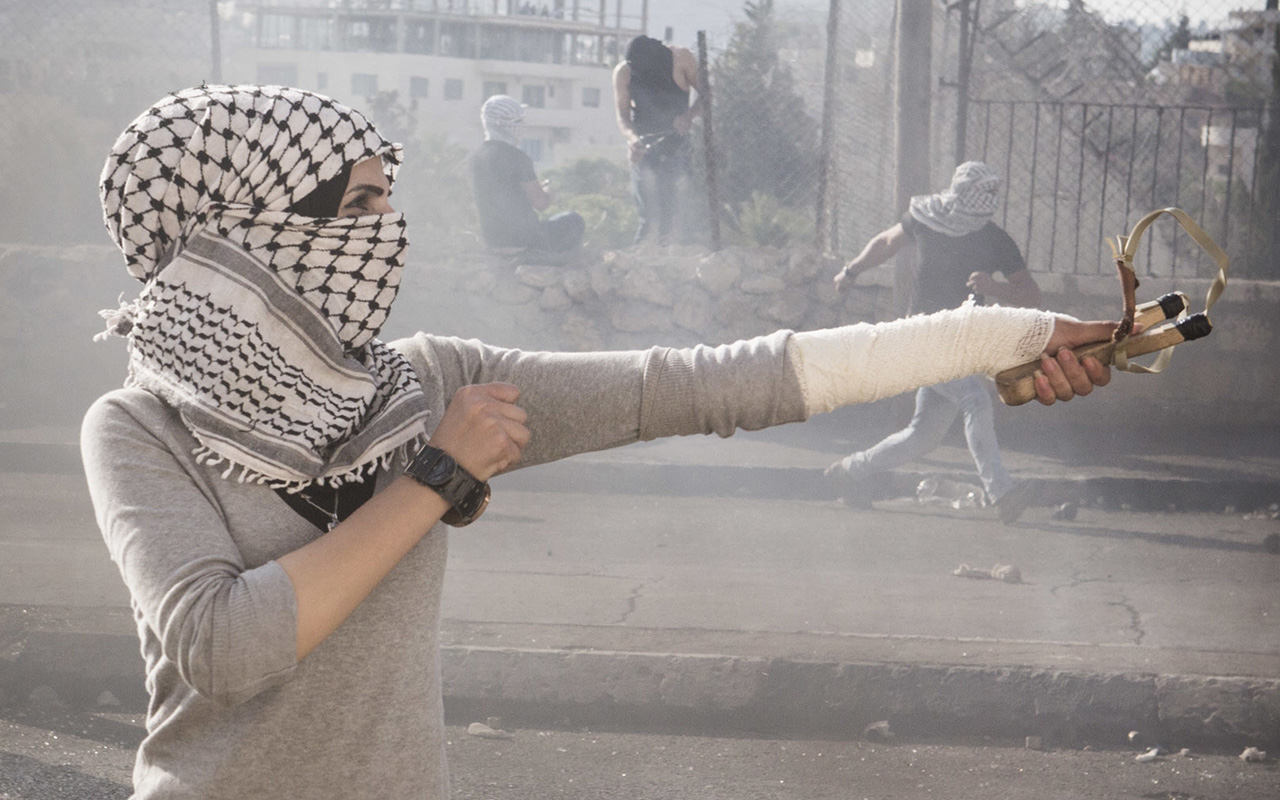 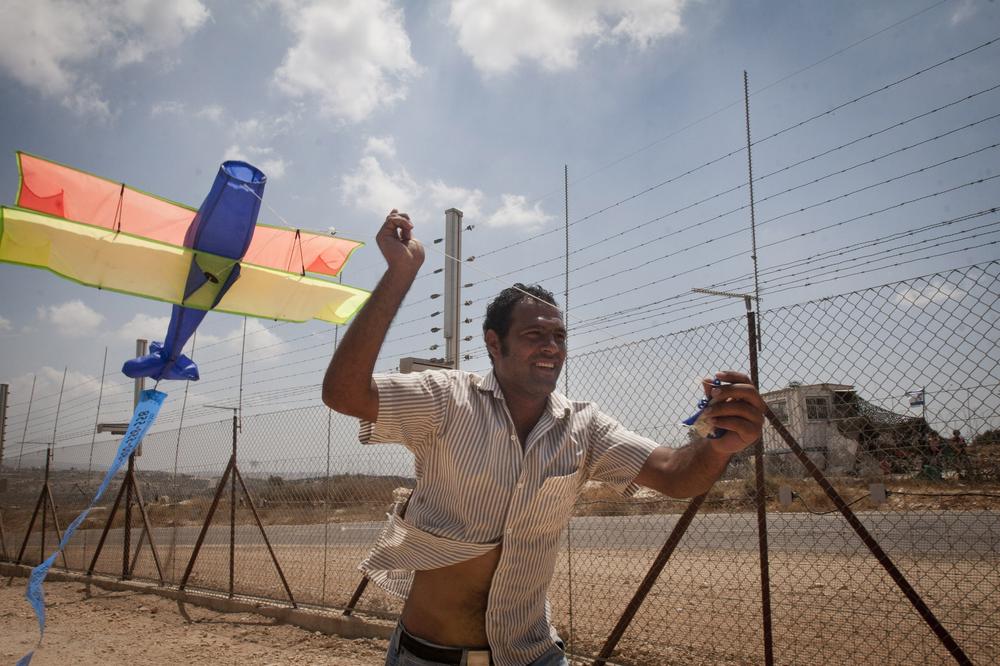 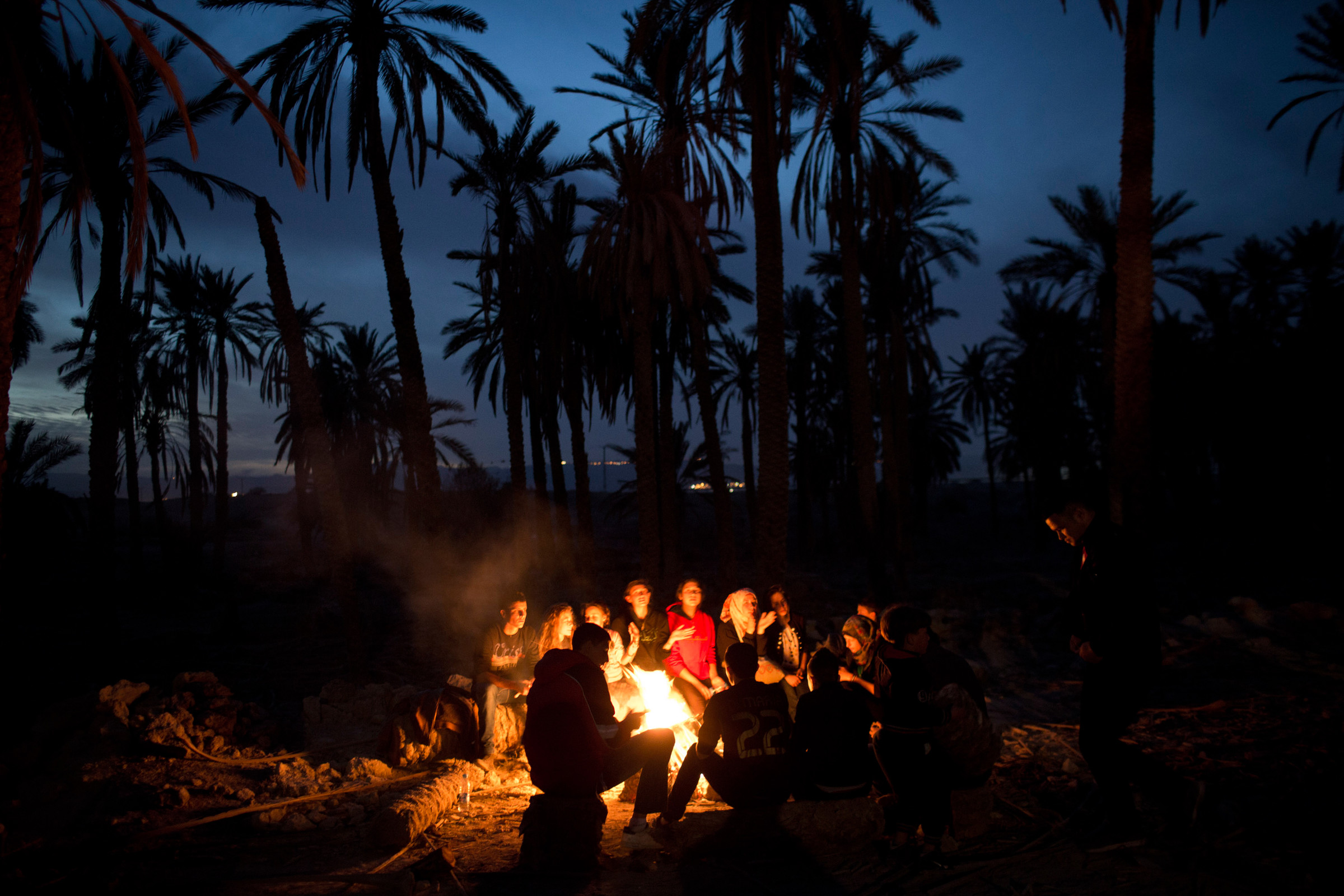 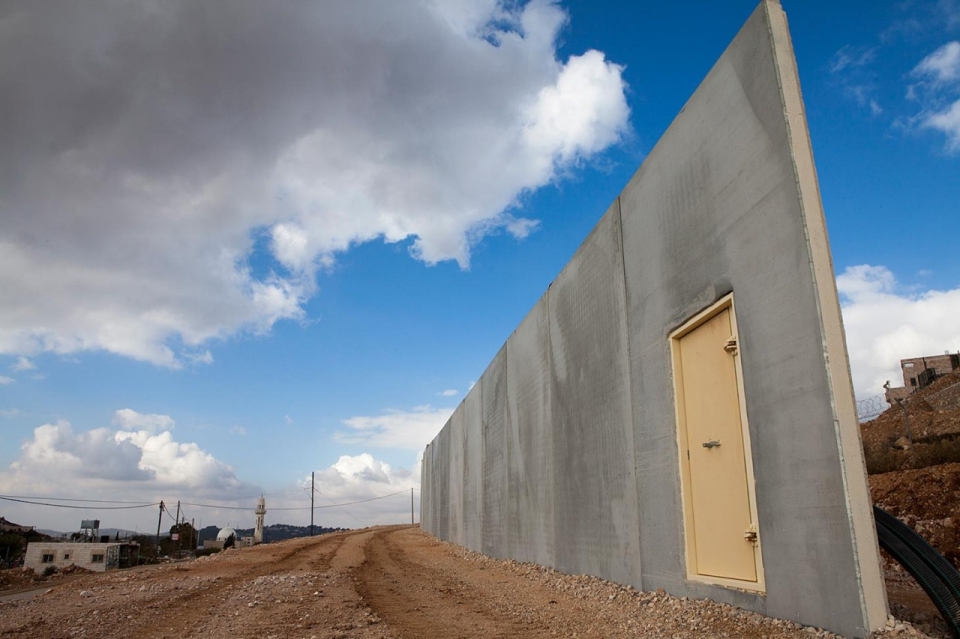 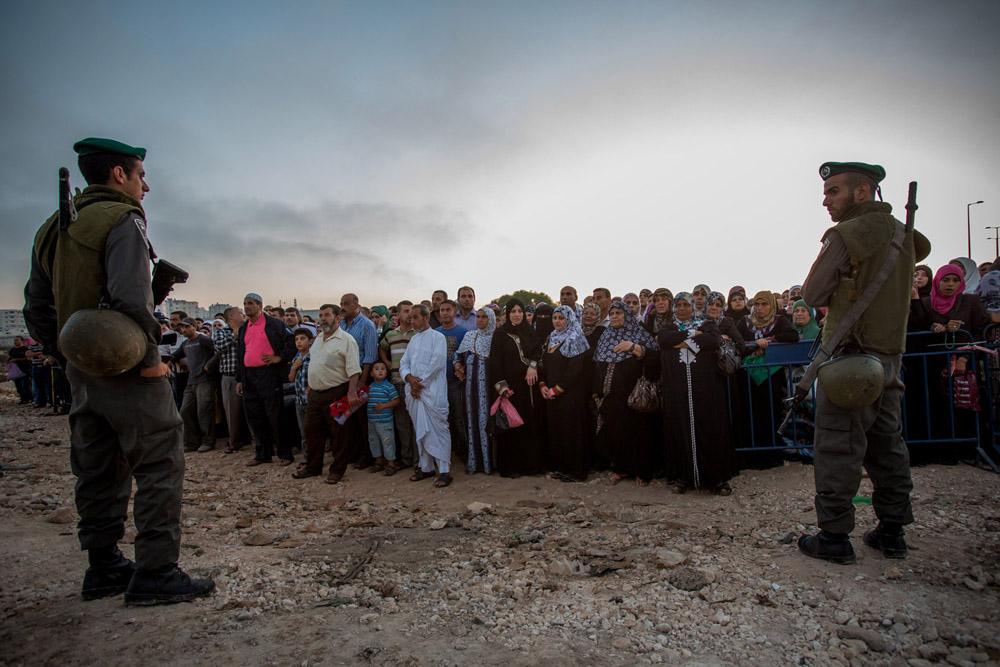 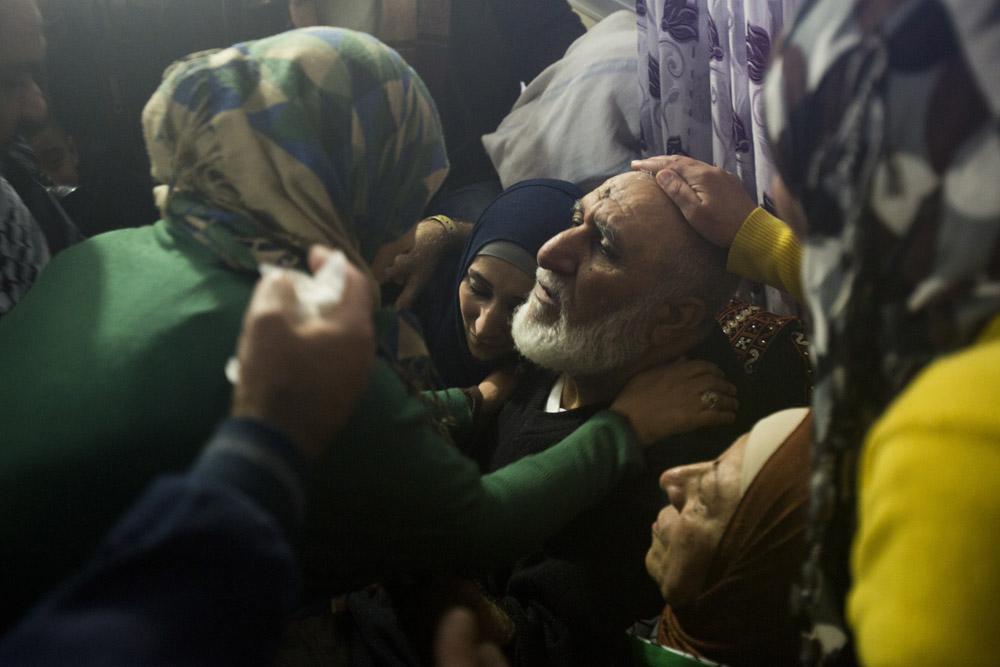